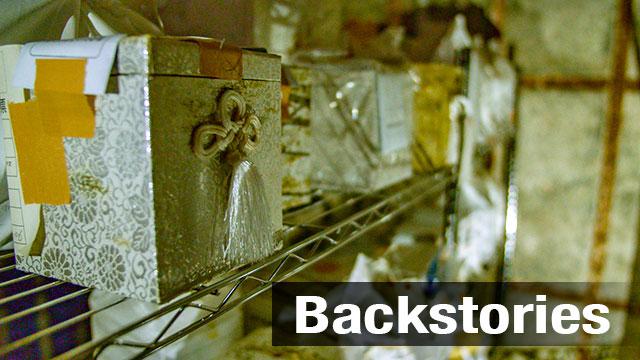 Ashes with no place to go: Death in the aging society

Eiraku Maiko
NHK World
Correspondent
In a cemetery in Yokosuka City, Kanagawa Prefecture, a building managed by the city houses ashes of the dead.

It's an impersonal concrete building that's usually locked up and closed to the public. If it weren't for a monument at the entrance, erected in memory of the departed souls, people wouldn't know that the building is an ossuary.

And this particular ossuary houses only the ashes of people who died with no remaining family members to claim them. The remains of about 900 people are here, with nowhere else to go.

There is no light in the building. Using a flashlight, I find a number of urns wrapped in white cloth on simple metallic racks. There are no memorial tablets or portraits of the dead, only the name plates on the urns identify the ashes.

The municipal government cannot hold a religious service for a deceased person whose remains are not claimed. But each year, when officials enter the building to place new remains, they lay flowers, offer incense and put their hands together in prayer for the deceased.

The number of people who have died without anyone to tend to their remains has rapidly increased in Yokosuka City since the year 2000. In most cases, their identity was known, but they're remains were placed at the facility because no one claimed them.

The number of such deaths temporarily decreased as the city made an effort to find family and relatives, but it rose again in 2017. There were 49 cases that year, only one of the deceased was not identified.

Kazuyuki Kitami, a Yokosuka City official who showed us around the ossuary, says most remains belong to elderly people who died while living alone. If they have no family or relatives to tend their grave after their death, or if officials are unable to contact the relatives, the remains are treated as unclaimed, with no regard to the wishes of the deceased.

Kitami says that even if officials are able to make contact with relatives, they will often refuse to accept the remains because of the cost and trouble of holding a funeral.

Kitami says he feels pity whenever this happens. "Some of the people whose ashes are kept here must have a family grave," he says. "But with no one to claim the body, the city government had to cremate them. It's really sad. It makes me feel like the deceased are saying, 'We should not be here'."

Yokosuka City launched a new system four years ago to reduce the number of unclaimed bodies. Under that system, officials ask elderly people living alone what kind of funeral they would like to have after their death and where their remains should be buried. Officials then ask them to sign a contract with undertakers, mediated by the city.

Although there are some conditions, such as minimum income, that must be met for people to use this system, 39 people have made contracts so far.

80-year-old Sumitaka Horiguchi is one of them. He is living alone in an apartment in the northern part of the city.

He lost his mother when he was nine, and his father remarried. Horiguchi lived with his grandparents until the age of 15, but later left their home. He found a job at a fish shop in the city. He once considered marrying, but was not sure whether he could support a family, so he continued to live alone. He has three half-siblings by a different mother, but does not communicate with them. He was unable to be with his father when he died.

He has not been able to continue working due to a bout of poor health three years ago, and he has consulted with officials at city hall. He was informed of the system for making a contract for a funeral and burial. Horiguchi decided to ask a temple that performs services in perpetuity for the souls of the deceased to hold a funeral for him and lay his ashes to rest.

Regarding his younger days, Horiuchi says, "I never thought about my death when I was healthy. I was living as I liked, drinking and smoking. I live alone and have repeatedly reneged on my obligations to my relatives, so I wouldn't care if I die leaving no one to claim my body."

But now he is living in a more constructive way. He quit drinking and smoking. He is now helping residents of a care facility for the elderly as a volunteer.

Horiguchi says, "I realized that I am leading an amazingly stable life after I made arrangements for my burial. I don't know how long I can stay well, but I want to visit my parents' graves and meet relatives."

A national census showed that as of 2015, about 5.9 million people aged 65 or older lived by themselves. That's nearly a seven-fold increase from 40 years ago and means that one of every six seniors lives alone.

"As society ages, the number of identified but unclaimed bodies is certain to rise rapidly," says Kitami. "In order to protect the dignity of the deceased and reduce burial costs for local governments, we have to seriously tackle this issue."