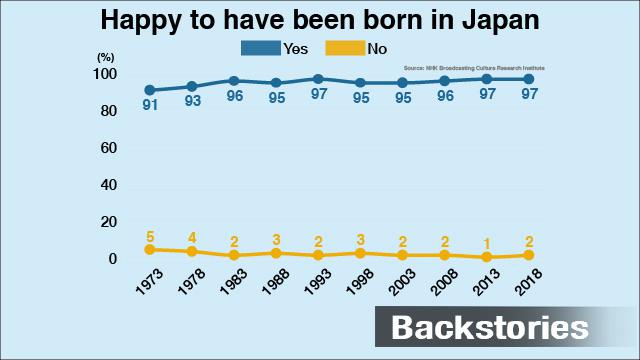 How has Japan's patriotism changed over the past half century?

Eiraku Maiko
NHK World
Correspondent
For Japan, 2019 marks the end of the Heisei era with the enthronement of Crown Prince Naruhito due in May. It is amid this change that the NHK Broadcasting Culture Research Institute has released its latest survey revealing how Japanese people view family, life and work.

Since the surveys began 45 years ago, the ratio of people who are happy to have been born in Japan has consistently been above 90 percent. But how has the past half century changed Japanese people's sentiment toward the country or their political views?

The Institute surveyed 2,751 people between June 30th and July 22nd. Respondents were all above the age of 16 and chosen at random nationwide.

52% think Japan is a "first-rate country"

The percentage of people who think "Japan is a first-rate country" in the global context had fallen sharply during the 20 years after the end of the bubble economy -- corresponding to a time known as the "lost two decades." But during the last 10 years, that figure has increased, and it now exceeds 50 percent. The proportion of people who think "the Japanese have many excellent qualities compared with people of other countries" has followed a similar trend, with a remarkable increase over the last 10 years to exceed 60 percent.

Professor Yukio Maeda from the University of Tokyo's Institute of Social Science says the media and what politicians say have great influence on people’s perceptions. Recently, it often seen that people from other countries admire Japanese culture, tradition and technology. Prime Minister Shinzo Abe has also promoted Japan’s potential. These developments have strongly impacted public perceptions.

Another result from the survey shows that the percentage of respondents who said they had "respect for the Emperor" has been rising since 2008. Forty-one percent felt that way, outnumbering those who said they had "favorable feelings" or "no particular feelings either way." The figure was the highest since the survey started.

Maeda says that since 2008, the proportion with favorable feelings has risen drastically while those feeling apathy toward the Emperor has dropped. He attributes the change partly to visits by the Emperor and Empress to areas devastated by disasters such as the March 11, 2011 earthquake. He also notes that the imperial couple paid their respects to those who died in World War Two, which He says has also impacted people's opinions.

Respondents were asked to what extent "public opinion," "voting in national elections" and "demonstrations, petitions and other activities" are reflected in national politics. The proportion of people who said such behavior is "effective" is falling. The percentage of those who think elections have an impact had stopped dropping and remained flat since 2008, but this time, the decline resumed.

Respondents were also asked what they think is the single most important issue Japanese politics should tackle. In previous surveys, "improving welfare" and "developing the economy" consistently stood out as the top two options on the list, accounting for a combined share of about two-thirds of the total. But in the latest survey, responses were more evenly dispersed among the top four choices, which included "maintaining security and order" and "protecting rights."

Professor Maeda says the changes reflect people's thoughts about whether they have alternatives to represent their voice. And He points out that changes to the importance of the economy and welfare reflect business sentiment and are expected.