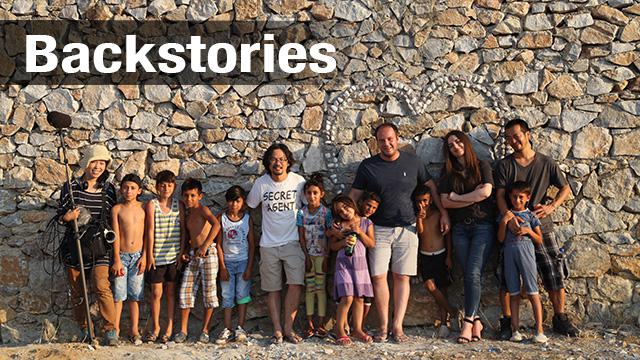 Where does identity come from?

Oono Momo
NHK World
Correspondent
Film director Lim Kah Wai is detached from the concept of nationality and borders. He doesn't live in one place. He plans his films as he travels and starts shooting wherever he ends up. His new film "No Where, Now Here" was released earlier this month in Tokyo. The film describes the lax and humane reality of Muslim minorities in Macedonia, Slovenia, and Croatia. We sat down with him to talk about the thoughts and emotions he infused into the movie.

The film is set in Balkan countries. What triggered your interest in making it?

Two years ago, I was a backpacker traveling through Slovenia's capital Ljubljana when I stayed at a guest house run by Ferdi, the main character in the film. He was very friendly. He would go out drinking with guests, and show us around the city by car. He took us to his hometown, Gostivar in Macedonia. There were Turkish national flags everywhere in the village. A cafe had a photo of the Turkish president on the wall. I felt as if I were in Turkey. Speaking with locals revealed most of the residents had Turkish ethnicity. They live in Macedonia, but have no interest in local affairs. They watch Turkish drama and read news about Turkey online. I wondered about their identity and thought it would be interesting if I made a film which was set there.

The main character in the movie is a pious Muslim. He's shown in the film offering prayer. But he's also shown occasionally drinking alcohol. What kind of character did you want the actor to portray?

The movie is mostly set in Slovenia and I wanted to depict the daily lives of Turkish people there. Their religion bans alcohol consumption, but these people still drink from time to time. The atmosphere in this country is much more lax, the rules are not as rigidly followed, and this allows the Turkish people to live move relaxed lives than they would back home. But they are still deeply religious. I wanted to portray this duality. I found it very human and relatable.

The actors and actresses in this film are not professionals. They are regular people and I thought filming them in normal settings would make it easier for them to act and portray the daily lives of regular Turks in Slovenia.

Did you find anything in common between your life and theirs?

I'm a Malaysian ethnic Chinese. I was born and raised in Malaysia, went to university in Japan and worked at a Japanese company before going to China to study movies. Now I make films around the world. I'm now based in Japan. As a Malaysian national, I would go back home to cast my ballot in elections, but as a non-resident, I don't care much about Malaysian politics. I've lived in Japan for more than 2 decades now. My friends tell me I have a Japanese mentality. But I don't feel that way.

Fifteen years ago, I went to China, my ethnic home, for the first time. I was a student. I found nothing special in Beijing and Shanghai, but felt very nostalgic in Guangzhou, my grandfather's hometown. My heart was filled with emotions. I even wondered if my true identity was Chinese.

Basically, I can quickly blend in and make friends with locals in any country or region, even when I can't speak the language. That's my forte. I can choose my identity depending on the situation. I don't develop a strong sense of belonging wherever I go.

The world is seeing the rise of social divisions and exclusivism based on national and religious borders. What do you feel about such a trend?

Struggles over identity always make me feel uncomfortable. Again, personal identity is defined by where the person's connections with others are and where their roots are, irrespective of their country.

Politicians use countries and religions in their rhetoric to win support, because the 2 notions can easily incite the public. But when looking at individuals in real life, I see that many feel a sense of belonging derived from personal connections, but only a handful are conscious of their country or religion. That's why they are easily instigated into thinking very critically of racialism and nationalism. At first glance, my film may appear to be a story of a loser who loves women and alcohol, but its real theme is "where do personal identities come from?" Every one of us has a place where we're certain our identity is. I would be very happy if people watch the film and think about their own identity.