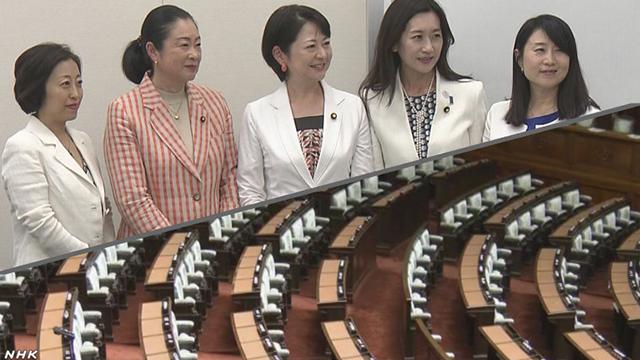 Japanese lawmakers have approved legislation that aims to narrow the gap between the number of men and women running for office.

The law stipulates that political parties and groups should aim for an equal number of male and female candidates in local and national elections.

"I expect women who previously hesitated to do so will courageously run for office," said the Women's Empowerment Minister, Seiko Noda.

The law was passed unanimously by both the Lower and Upper Houses of the Diet.

Lawmakers supporting the legislation are led by former education minister Masaharu Nakagawa. After the bill was enacted, he told a meeting of the group on May 16 that the challenge of increasing the number of women in politics is just beginning.

Currently, there are 47 female lawmakers in the Lower House, only 10% of the total.

According to a survey conducted by the Geneva-based Inter-Parliamentary Union, Japan is 158 out of 193 countries in terms of women in parliament, lowest among the 35 industrialized nations.

The problem extends to the local level. About 20% of municipal assemblies don't have a single female representative.

In 2010, the government set a goal of increasing the proportion of female candidates in national elections to 30% by 2020. But this target was still far from being achieved in last year's Lower House elections.

How effective will the law be?

The new law calls on political parties and groups to make their best effort to field the same number of male and female candidates. Some have hailed it as groundbreaking, but others have expressed doubt, saying it may not be effective.

Upper House lawmaker Fusae Ota heads the ruling Liberal Democratic Party's Women's Affairs Division. She says she wants to support women who wish to run with the LDP, but that some within the party are not happy about giving them preferential treatment.

Ota says one way of increasing the number of female candidates is to set a target, for instance 30 percent, in the proportional representation block in the Upper House election. But she says such a plan may face opposition from the party leadership.

The LDP has launched a series of events for women interested in politics. About 100 women took part in the first event held in April. Lower House lawmaker Shinjiro Koizumi was invited as a lecturer. He said he was working hard to help mothers with small children take part in events he holds in his constituency.

The goal of the program is to find and nurture future candidates. Some who took part in the April event said they intend to run in local elections next year.

She says the party is already discussing ways to increase female candidates. She says it could work together with civil groups to recruit women. But she says finding candidates is not easy.

On its website, the party posts interviews of female municipal assembly members speaking about why they ran and what they are working on. The party hopes the interviews will help women become familiar with politics, and convince them to take part.

Nishimura says she hopes women will realize that her party wants them to join.

The importance of having female representatives

The Inter-Parliamentary Union interviewed 272 lawmakers from 110 countries and found that there are significant differences in the policy issues that male and female lawmakers take up.

Men tend to focus on issues concerning diplomacy, economics, and education. Women, on the other hand, tend to put more importance on gender equality, local issues, and family affairs.

All of this suggests that female participation in politics is crucial to addressing issues that are often overlooked or dismissed by male lawmakers.

However, party officials say it is much more difficult to recruit women candidates than men.

The situation in the United States

A report published by Professor Jennifer Lawless at American University in 2005 shows that women tend to refrain from running for office, even when they have equal academic background and work experience to male candidates.

The report says that female candidates face difficulties in gaining public support. It also found that parents tend to talk about politics with their sons rather than their daughters. This makes it difficult for women to develop political ambitions.

The United States has many programs for women aspiring to join politics. Rutgers University is known for its research on women's participation in politics and offers an election training program for women.

The program includes seminars on how to gather campaign funds and how to effectively communicate political messages. 2,500 people are said to have taken part over 18 years. Among those who subsequently ran for office, more than 70% were elected.

And groups affiliated with the Democratic Party, one of the country's two major parties, are recruiting female candidates. They hold seminars on topics like "single mothers in politics," and provide support to the candidate right up to the election.

Such efforts have apparently worked. 32% of the Democrats in the House of Representatives are women. Meanwhile, the number for Republicans is only 10%.

Professor Mari Miura of Sophia University is one of the founders of a group helping women hone political skills.

Miura says her group teaches women about policymaking and speechwriting. She says the recent spate of sexual harassment cases have helped more people understand the importance of including women in the political process. She says the new law is a historic step forward.

"I cannot deny that it's difficult to both campaign and carry out Diet activities unless you have physical strength and can dedicate all of your time," said one Diet member. "But if the Diet is dominated by such people, it won't be able to realize policies that truly reflect the needs of society."

This will be a test, showing how committed the parties are to the principles enshrined in the new legislation.